I need to remember updating on here once in a while - even more than usual as I've been kept busy with the patron blog.

I made some more ceramics as a test firing and picked out most of the pastels for a picture - reminds me of spring. 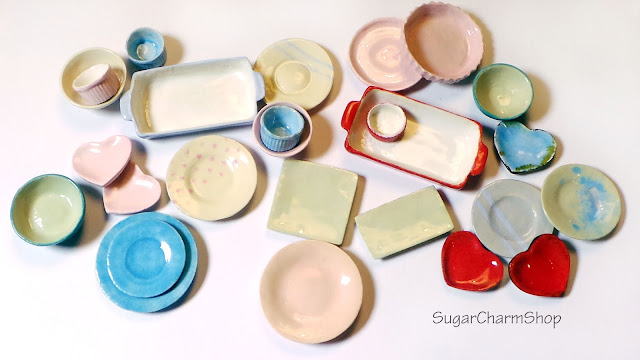 I got some new clay - hence the 'test' firing. My old clay had gotten pretty stiff (have had it for probably more than half a year) and so I decided to buy a new pack as I'm too lazy to spend THAT much time reviving and kneading it... Problem is, that the store I used to get it from went bankrupt last year and I couldn't find any other danish sellers offering that particular brand/type of clay *sigh*
So I got a new one - recommended to me by a lady at a different shop after I explained what I was going to use it for, the firing temperature I usually use etc.. Good news is; it is SO much better to work with! - SO much easier to make handles and mold things without small pieces drying out in a matter of seconds AND I can even use it with my silicone molds to be able to make a larger variety of pieces (the rectangular dishes, squared plates, heart shaped plates, pie dish and ramekins were some I originally made from polymer clay and I then made molds from them).
The problem (which may not even turn out to be a problem) is that I'm scared the glaze will crackle. I had that happen to a lot of pieces after a few days/weeks with the old clay, although I didn't have any problems since I changed to a different clear glaze and switched to a higher firing temperature.. Yet I'm still worried that something similar will happen to these, so I'll be keeping an eye on them before making more and before using these for anything.
I'm thinking that 1-2 months should be an okay time frame to judge? - you see, the next fair is in the last weekend of April (I think), and I would love to bring ceramics to sell. If there are any experienced ceramists out there, I'd much appreciate a second opinion as to whether or not I need to wait longer than that before selling any of the pieces made from this new brand of clay.
Posted by Tanja - SugarCharmShop at 9.3.16

Email ThisBlogThis!Share to TwitterShare to FacebookShare to Pinterest
Labels: 1:12, Ceramics