Excuse the long headline, haha.
In this post I'll be reviewing the liquid clays I have (+ bake&bond because it's pretty much the same thing). I'll also talk a bit about what the different liquid clays work well as, when it comes to making frosting, icing etc.

I frequently get questions about what type of liquid clay I use, how I make icing etc. So I hope this will answer any questions you may have - if not, feel free to ask! :)

About a year ago I made a post on my old blog comparing Fimo deco gel and the Sculpey bake&bond, but at that time it hadn't been very long since I purchased the bake&bond while the Fimo deco gel was something I'd gone through numerous bottles of... so I've now had quite a bit of time to really try out the bake&bond.
You're probably not able to see by looking at the picture but the Bake&Bond is almost full, after all this time. It just hasn't been a bottle I reach for that often - Don't get me wrong, there's nothing wrong with the product as far as liquid clay goes, but for the "bonding" I really don't find it better than Fimo deco gel or the regular Translucent liquid sculpey.
As I wrote in my review back then, when comparing bake&bond to the deco gel (tested how well they held together polymer clay and wood); 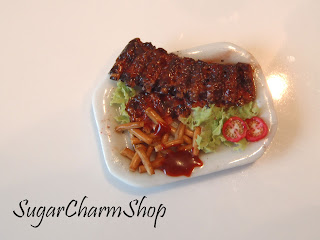 "The bake&bond is hard after baking while the deco gel obtain a more rubber-ish feel and stays very flexible" - which I found helped it grab on to the wood even better.
But what have I been using the bake&bond for then? *Drum roll* - Ketchup... yup, ketchup! pretty sad, isn't it? but on the bright side I really think it makes up for great ketchup/burger dressing and BBQ sauce because it's thicker than the other liquid clays I've tried. Just mix in some red, orange and maybe a bit of brown soft pastels (for ketchup) and voila! :) - it can be mixed with other things as well such as acrylic paint.
Color: Bake&Bond is white in the bottle but has a semi clear color after baking.

As far as I know there are 3 brands that makes liquid clay; Fimo, Sculpey & Kato.
Unfortunately I have yet to try the Kato liquid clay - and I intend to! at some point. But I feel the other ones provide all the qualities I need for now.

Comparing Fimo deco gel and Translucent liquid sculpey
For a long time the only liquid clay I'd tried and used was the Fimo deco gel, and it is still my favorite one!
Colors before baking: TLS is white while the FDG is the only liquid clay which is clear while uncured. Colors after baking: They're both translucent after baking but the FDG reaches a higher transparency. Consistency while unbaked: TLS has an almost honey like consistency while the FDG is more runny. Consistency after baking: Both the TLS and FDG obtains a good flexibility after baking though the FDG is more clear. 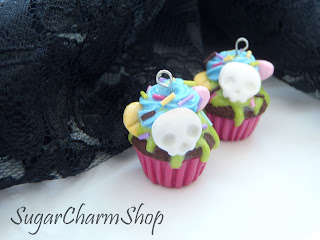 Frosting/Icing; If you want a nice thick frosting or whipped cream you can mix some solid clay with liquid clay. Both TLS and FDG are good for this. You can do it the hard way; break some clay into tiny pieces, pour in some liquid clay and mix... and mix... and mix... and.... mix...
after doing this every time I figured out a couple of other ways of doing it.
Tip#1, if you're not in a hurry you can break the solid clay into pieces, pour in the liquid clay and let it sit for a day or so (maybe less time) - the liquid clay will 'break down' or soften the solid clay so it's easier to mix :)
Tip#2, The fastest and easiest way I've found might get your hands a bit sticky (Or you can use rubber gloves when doing this) - condition some solid clay in your hand till it's nice and soft, flatten it and drizzle on some liquid clay. Fold the clay and begin mixing the 2 between your fingers. You'll need to flatten the clay and add liquid clay a couple of times. When it gets to the point of being super soft and sticky put it into the container you want to store your frosting/whipped cream in, pour in some more liquid clay and mix with a tool. This is a more messy way of doing it but it's a lot faster, especialy for making larger portions.
*more solid clay will make the frosting/whipped cream thicker, more liquid clay will make it thinner and more like icing for cinnamon rolls and sugar cookies.

TLS makes good icing on its own - not the thick whipped cream effect, but its great for icing, blood, slime etc. Just mix in some soft pastels. (I used TLS and green pastel for the cupcake in the picture).
Syrup and soup: Though you can use TLS for syrup and probably soup as well, I don't think it gives you a result nearly as nice as when you use FDG. Leave it as it is (for a clear soup) or mix in pastels to get the perfect effect for melted butter, syrup and more.

If I had to choose only 1 type of liquid clay, I'd go for the Fimo deco gel. You can achieve everything from the clear soup to thick frosting + any other cool uses you can think of :)
Posted by Tanja - SugarCharmShop at 2.11.12