Hey! Too soon to be proud of myself for keeping up with the blog since it's only been a week, but I'm going to pad myself on the back anyway, haha.

For today's food tutorial I made some miniature stir fry with noodles, broccoli, baby corn and other goodies - quite a few had been requesting different unspecified noodle dishes on my channel and a couple of people had asked for stir fry specifically, so I hope you'll enjoy the video :)

The tutorial also includes a how-to for the simple miniature wok. 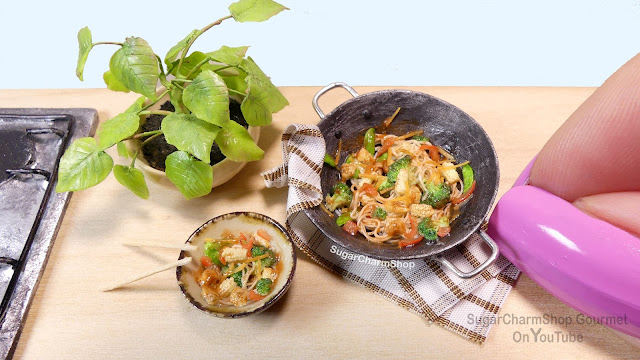 I feel super motivated to create things at the moment, which is awesome, but at the same time I'm as much demotivated by my craft room;
I've been reorganizing my craft room on and off for the past... many months, and for the past while I haven't made much progress. I finally found out what bothered me so much,.;my desks... I love my desks - they're big, spacious, sturdy as heck and they were cheap (got them used from a guy who's 2 sons were moving away from home). But they also annoy me,. mostly because they have this "great design" that's supposed to look fancy, but to me it means 'curvy' table tops that create an uneven work space and don't exactly look neat when you put them next to eachother - which to top it off wastes space. They're also extremely heavy which means I'm not even going to consider playing around with different placements again.. did it once,.. don't want to re-live that. So I pulled myself together and ordered some new desks from IKEA. They're not going to be as sturdy (made sure they could hold the weight of my heaviest tools combined), I know, but they're going to look a lot more neat, sleek, the measurements when combined (3 desks) match my room perfectly, they're going to give me more work space and more space for storage units underneeth - So I'm a happy camper!
They will be delivered on wednesday - hopefully enough time for me to be able to record the videos that'll be up in that time frame and temporarily move a s*** of stuff to our living room so there's room to move out the old desks. Can't wait to get it all in place and get to work on lots of mini projects!
Posted by Tanja - SugarCharmShop at 10.1.17