Lettuce & more on the copycat issue

Today's tutorial on 'SugarCharmShop Gourmet' is for lettuce :) This is a fairly simple project - it doesn't require too much time or too many different materials - and it adds such a nice pop of color to any miniature scene. Fruits and vegetables is something I love to make in miniature because it's so colorful - it makes you happy! 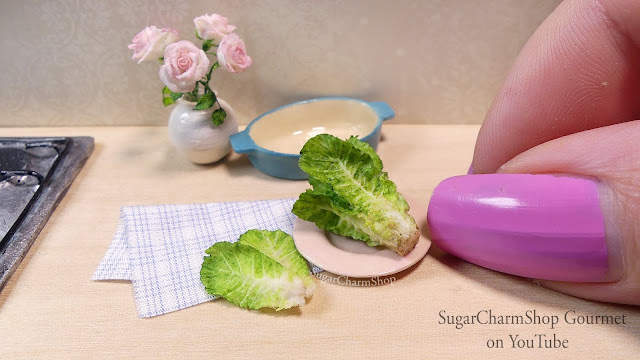 On the post I made around a week ago about being called a copycat, I received a comment, which was written in such a nasty way that I chose to delete it. I still have the comment, but I'm not going to go through the different 'paragraphs' of reasons why this person called me a liar.
And before I get further into this, you might wonder; why even address it?. Because, in a situation like this, there's no winning. If I don't address it, that means I'm trying too hide something, right? which makes me a liar. And if I do address it, I'm trying to hard to defend myself, which also makes me a liar. So my reason for addressing is that what I wrote in that post is the truth, and the comment I received were a bunch of assumptions - all of which were false and to be honest, fairly silly. 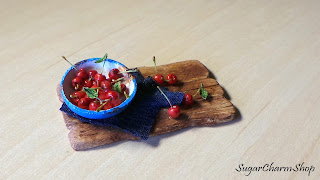 One of the examples used were some cherries I made back in 2014 - the person claimed those to be a copy of another miniature artist's work. As I've mentioned countless times I'm inspired by real food or pictures of real food - so though I'm sure there's no reasoning with those who want to believe I'm lying, I wanted to show you a picture of the cherries I made together with the photo I was inspired by;

I don't own this picture - it's one of the many food photographies I found and keep on my computer for inspiration.
In my version I took inspiration from the blue and white enamel bowl, the denim fabric that the bowl is placed on and the rustic wooden surface.

I am aware that there will always be people who won't believe me, or people who are not interested in having actual evidence to support their statements. And if you don't like me or my creations, there's not much I can do to change that.
Just know that when there are so many miniature artists in the world, all working within the same categories and all inspired by real life, the different seasons, holidays etc.- they're bound to make things that look similar, even if they weren't inspired by someone else's piece. When fall and Halloween rolls around, everyone makes pumpkins. For thanksgiving it's turkey, candy canes and gingerbread houses for Christmas and so on.

Another reason why I'm choosing to address this in this post is because after I had finished recording this week's tutorial (lettuce) I decided to search for lettuce tutorials on YouTube. Why? to torture myself I suppose, or to prove a point.. There are only so many ways you can make something and I did find one using CLOSE to the same technique I just used in my video. I hadn't seen this video before, I didn't copy this person or their technique - I just made the lettuce the only way I could come up with in order to get the effect I wanted. I've used these techniques in videos before. (Please refer to the video for more information about the techniques I recommend and don't recommend for making lettuce).
The thing is, that after seeing the other video, I was actually reconsidering even posting the video I made, which is silly since I hadn't seen it beforehand. And as I explained in the tutorial, there are reasons why I chose to use certain techniques over others. So my only other option would be to never post a lettuce tutorial - which is also ridiculous.

But how can the techniques then be so similar? - because again, there are only so many ways you can do something, and even fewer ways to get particular/exact effects. It is close to impossible to make something that none of the other 7.5 billion people in the world has not yet thought of. If we had to search on YouTube, Google or various social media platforms every time we wanted to make something, to make sure it hadn't been done before, we would never be able to do anything.
I won't be addressing this in future posts, because I'd much rather spend time creating and sharing. And in the name of 'sharing the love' I'll list a few of my favorite instagram accounts when it comes to inspiring food photographies (feel free to go through my entire list of the people I follow @SugarCharmShop - lots of delicious food/decor inspiration)

@dennistheprescott - His capability to make any food look scrumptious is outstanding. Even cheese platters and sushi, which are 2 things I don't eat ;D
@annagarciafrigola - photographer/stylist - beautifully arranged food.
@wagyu_beef - I follow a couple of accounts that post mainly raw meat due to my love for butcher's themed stuff.
@still_life_gallery_ - Exactly what the name suggests. Beautiful and harmonic scenes.

Anyway, Hope you'll enjoy the tutorial - I will be using lettuce in an upcoming video together with the cucumber from a previous video - just need to post another component first :)
Posted by Tanja - SugarCharmShop at 19.2.17